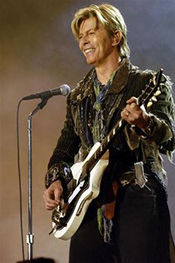 On January 16th, 2016, David Bowie lost his battle with liver cancer, and the rock world lost one of its all time greats.

His influence on music is matched by few. For five decades, he continuously reinvented himself and delivered exciting new forms of music.

On this broadcast of Live in Concert, we’ll listen to an amazing performance from what became his last-ever tour. It was captured live at the Point Theatre in Dublin, Ireland on November 23rd, 2003, during his “A Reality” tour.