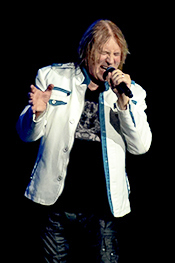 On this broadcast of Live in Concert, we’re going back to Def Leppard’s highly successful “Adrenalize” tour.

We’ll listen to a legendary concert captured live at Don Valley Stadium in their hometown of Sheffield, England. It was June 6th, 1993.

Click here to listen to Lisa’s exclusive interview with Joe Elliott and Phil Collen about Def Leppard’s indu tion into the Rock and Roll Hall of Fame!